So in my attempt to show that this London Cycle Hire Scheme is on for a hard time. I went out today to find out what the other cycle hire scheme is called and have a look at how it works. 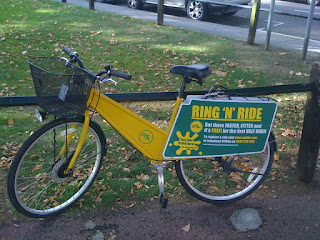 On my way to work today I saw that the local “docking station” that I knew of. Had its sole bicycle standing there ready to use, as I always see it, so I thought I’ll get a picture on my way back.

Only to be proved wrong on my way home as it was rented out :)

I then found out who they were … “The OYBike System is a street-based rental station network that allows you to hire and return a bicycle via your mobile phone.”

Reading their website it sounds simple enough to hire, they got a fair good coverage in west London area, think Hammersmith and Fulham. And a few other places though I was sure I have seen more places around London, only daily riding about.

And the cost for the hire is good, the first 30min FREE, then around £2 per hour.

And the “docking station” I knew of near me is a parking place only according to the website, so why is there always a bicycle there. Though looking at the map of their locations I found out that there is 2 more quite close to me where I can rent bicycles from.

I also just found out, by looking at the map, that there are also locations in Reading and Cambridge, though I do not fancy riding that far on these bicycles.

I do hope that oybike have been contacted regarding the London Cycle Hire Scheme to either work together or be allowed run side by side.

This site uses Akismet to reduce spam. Learn how your comment data is processed.

I have nicked the sub title An English Dane (from a fantastic book) because I am a Dane, who have lived most of his life in the UK. But I do see myself more as an European. Lived in the UK, FR, DK, travelled the world and drinks Yorkshire Tea WITHOUT milk or sugar, just leave the bag in :)

Theme by Anders Noren — Up ↑